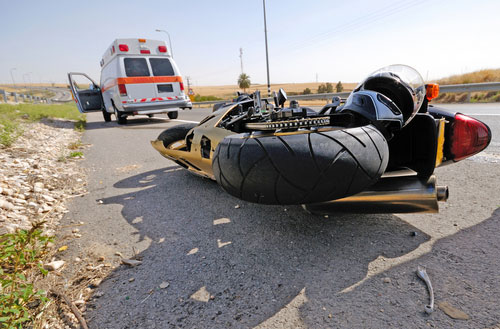 Here Is a List of Some of the Common Causes of Motorcycle Accidents:

Head-on-Collisions – 56% of motorcycle accident deaths happen due to a crash between a motorcycle and other vehicles. In a majority of these accidents, the car strikes the motorcycle from the rear 5% of the time. Due to the nature of physic and the size of a vehicle compared to a motorcycle the motorcyclist can end up with fatal injuries, that can sometimes result in death.

Lane Splitting – Lane splitting takes place when the motorcyclist rides between two lanes of stopped cars, or cars that are moving slowly. Lane splitting is common when the traffic slows down. Due to its size, the motorcyclist can move their bikes into the makeshift lanes. However, it becomes a common reason for accidents due to the close proximity of the cars to the motorcycle. It also reduces the space the bike has to maneuver. Additionally, accidents also happen because cars do not always anticipate that the motorcycle will be pulling up next to them.

Hitting Fixed Objects – Hitting fixed and stationary objects is another cause of motorcycle accidents. The impact can be dangerous, whether it is a tree, a vehicle on the side of the road, a fence, or any other object. Motorcycles hitting fixed objects accounts for 25% of motorcycle accident deaths. Hitting fixed objects can often result in the rider being thrown from the bike, causing terrible injuries and death in some cases.

Road Conditions – Road conditions can cause more danger to motorcycles than cars and other vehicles. Due to its small size, road conditions such as, potholes, dead animals, slick pavement conditions, uneven heights between lanes, and other irregularities or unexpected objects in the road pose a serious safety threat to motorcycles.

If you or someone you love has been injured in a motorcycle accident, contact the law firm of Robert P. Ianelli for legal representation. We are dedicated and committed to solve your legal problems.